Interview with Sir Paul Collier, Professor of Economics and Public Policy in the Blavatnik School of Government at the University of Oxford 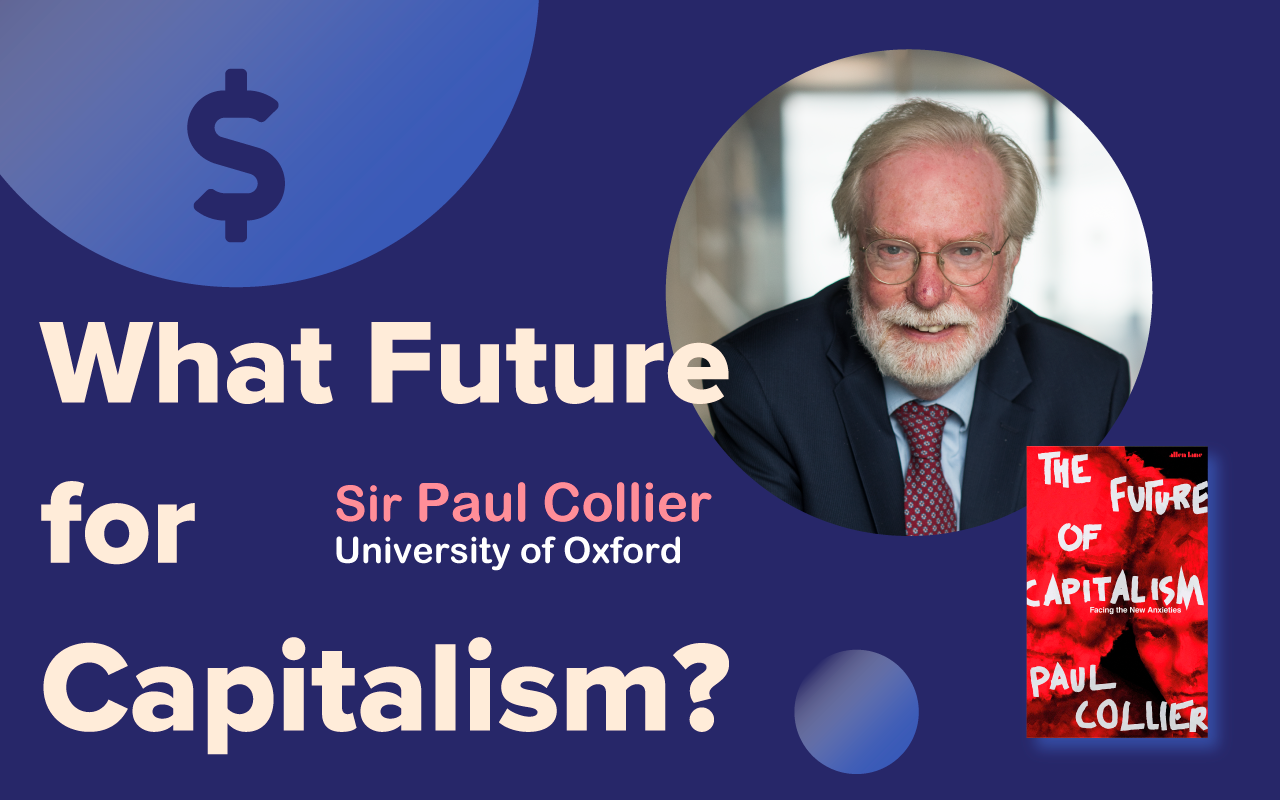 As the global wealth gap widens and multinational monopolies gain in power, the once sturdy edifice of global capitalism seems shakier than ever. In the United States, a poll released in October 2019 shows that a third of the population holds a negative view of capitalism. The young in particular are looking for alternatives in record numbers.

But do any viable alternatives exist? According to Sir Paul Collier, Professor of Economics and Public Policy in the Blavatnik School of Government at the University of Oxford, they don't.

Professor Collier argues that capitalism has indeed derailed and needs fixing, but radical social revolution would offer only sadness and suffering. We are left with just one viable path of action: to put capitalism back on the rails.

How do we take on the challenge of repairing a broken economic system? Coming up with a solution will take the combined effort of an entire generation, and Professor Collier has some ideas on where to start.

Alex: In your book, you claim that "capitalism is a system that has the potential to lift us all to unprecedented prosperity", but is "morally bankrupt and on track for tragedy." What led you to your assessment on the state of capitalism?

Paul: First, let's acknowledge that capitalism is the only system we've discovered that is capable of dramatically raising mass living standards. Capitalism has only been around for 250 of the 10'000 years of human civilization, yet it's the only period in which we've had such dramatic increases in living standards.

We need capitalism to work, but it doesn't work on autopilot. If left to itself, capitalism periodically derails and creates catastrophic new anxieties, which then have to be addressed by public policy.

Capitalism can be made to work, but there's no global blueprint for how capitalism will work under all circumstances. We just don't know enough for that. What we can do when capitalism starts to derail is address its manifest problems.

Alex: Has capitalism derailed before?

Paul: In the 250 years of capitalist history, it has seriously derailed at least three times. The first derailment was a public health crisis in the 1840s, and the second was mass unemployment in the 1930s. Both derailments were addressed within about 20 years by new public policy solutions to those particular anxieties.

We are living in the third derailment, which started around 1980. This time, the anxieties haven't been addressed, allowing the problem to get worse and worse.

Alex: What are the symptoms of this third derailment?

Paul: This derailment is categorized by two new social rifts. The first is a spatial rift between a booming metropolis and broken provincial towns and cities. This rift started around 1980 as a result of the increasing number of globally traded markets. More global markets meant there was room for fewer but bigger winners.

You see it very much in Japan: Tokyo is still growing, whereas almost everywhere else in Japan is in demographic decline, with the bright young people moving to the metropolis. We see it in Britain with the agglomeration of London. We see it in France with Paris. We see it in America. This phenomenon, very common in OECD countries, is known as spatial divergence. 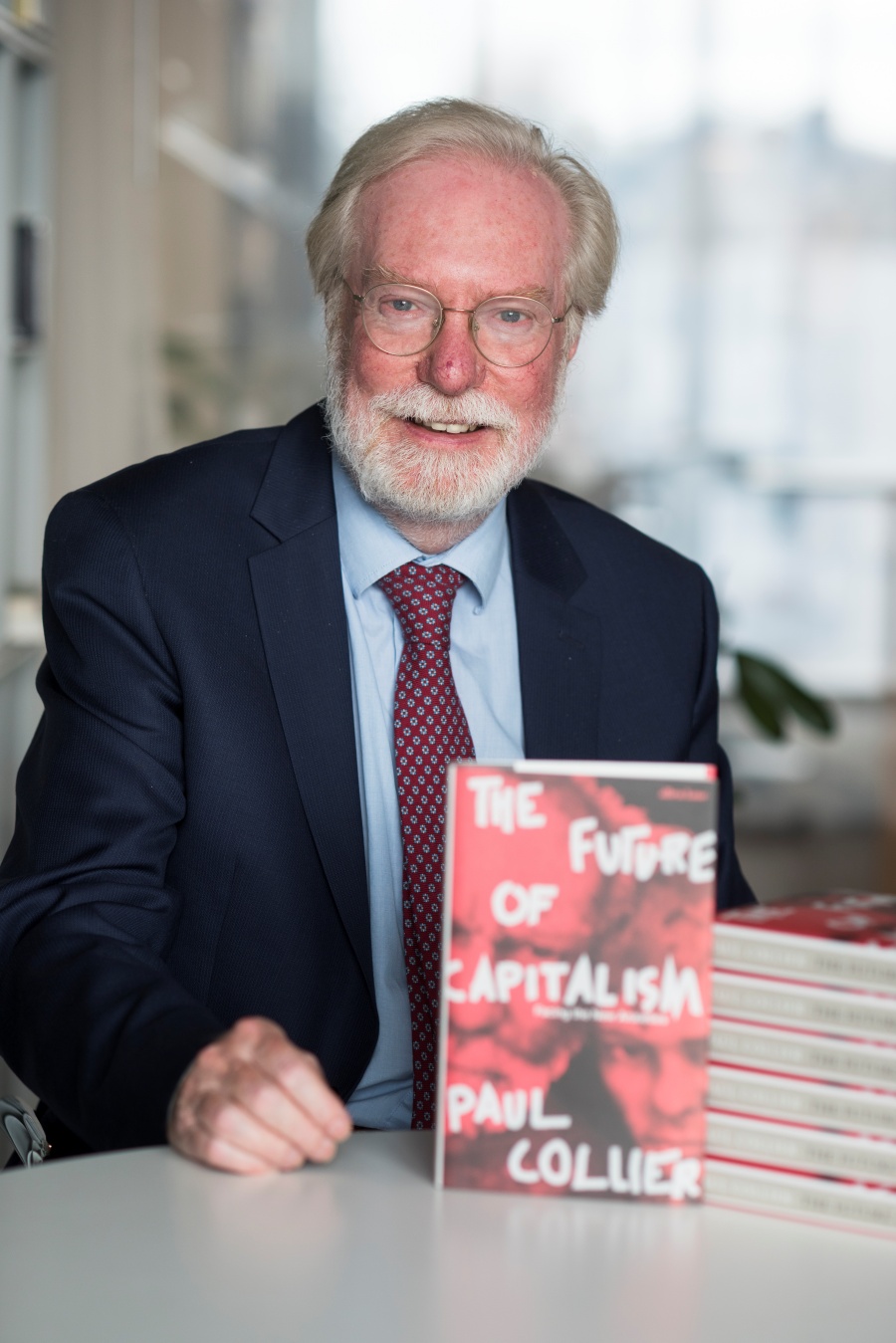 Sir Paul Collier is a Professor of Economics and Public Policy at the Blavatnik School of Government, University of Oxford, as well as a Director of the International Growth Centre and the ESRC research network in Social Macroeconomics. His research covers: the transformation from poverty to prosperity; state fragility; the implications of group psychology for development; migration and refugees; urbanization in poor countries; and the crisis in modern capitalism, which is the subject of his most recent book, The Future of Capitalism: Facing the New Anxieties. Sir Paul received a knighthood in 2014 for services to promoting research and policy change in Africa and has been listed as one of the hundred most influential public thinkers.

The reason for that rift is generally the increased complexity of production, which has benefited the well educated at the expense of the less educated.

Both of these rifts are linked in that the well-educated, cleverest young people in the provinces are moving to the metropolis, increasing the sense of despair in those provinces as they feel their brightest and best talent leaving.

This is most obviously the case in America, where we see so-called "deaths of despair." The life expectancy of elderly or middle-aged manual workers from provincial America is falling as they turn to drug addiction, alcohol and so on. These deaths of despair have become a major phenomenon, and we are starting to see cases in Britain.

Companies require a sense of purpose and shared identity

Alex: What can companies do to begin to address the spatial and educational rifts?

Paul: Companies are vital entities for our society. They are probably the single most important source of collaboration to achieve human purposes. As such, companies have to be morally load-bearing. They have to take responsibility for a contribution to society, rather than just focus on profits for shareholders.

Profits for shareholders are necessary because if a company isn't profitable, what it's doing isn't sustainable. But profit is a constraint, not a purpose. The purpose of a business is to find sustainable and hence profitable solutions to society's problems.

In America we recently saw a remarkable shift, with the Business Roundtable statement on the purpose of corporations dropping the notion that companies exist above all to serve their shareholders.

Japanese companies have a much longer history of this. In my book, I contrast Toyota and General Motors. Toyota has been able to build trust and loyalty in its workforce, as well as develop a shared identity and forward-looking purpose in a way that GM hasn't.

Alex: How can companies develop a shared identity?

Paul: When it comes to shared identity, CEOs have got to be able to credibly use that word "we." Historically, the leaders of Japanese companies have done so by making visible sacrifices: not being greedy, wearing the same clothes as ordinary workers, eating in the same cafeteria as ordinary workers—these are important ways of signaling "we."

If we go into human psychology, we know there are two different models of leadership. One is dominance, which you can find in apes and many animal species. Dominance is basically rule by fear. But unique to humans is a different form of leadership, which is establishing respect and good opinion amongst the group through self-sacrifice.

That's true within companies, and is also true about collaboration between companies. For instance, European companies collaborated to make the Airbus. The Airbus has been a long-term trusting relationship between many companies with the objective of being able to out-compete Boeing&#8212and that's been successful.

Alex: In the Airbus example, those companies had an economic incentive to work together and become more competitive. However when we look at GAFA* companies, it seems that they've reached a point where there is no longer any incentive within the system for them to change their behavior. How would you suggest addressing that issue?

Paul: These things obviously need to become public utilities! The current situation is completely absurd. First of all, by taking advantage of powerful scale economies, these companies have succeeded in naturally becoming global private monopolies. We know that private monopoly is completely disastrous—we've known that since the 19th century.

I think we're in a temporary phase in which we are not coping adequately with these global private monopolies because it's hard to get global cooperation. If they were national monopolies, they would have been dealt with very fast.

There are two approaches to dealing with private monopolies. Either nationalization—you make them public utilities—or regulation. Regulation is harder than it seems, because it turns out to be a dynamic game between the regulator and the company trying to get around the regulation. The regulatory approach is really God's gift to lawyers. So on the whole, I think the most sensible approach is making these public utilities.

Alex: Do you think that's likely to happen?