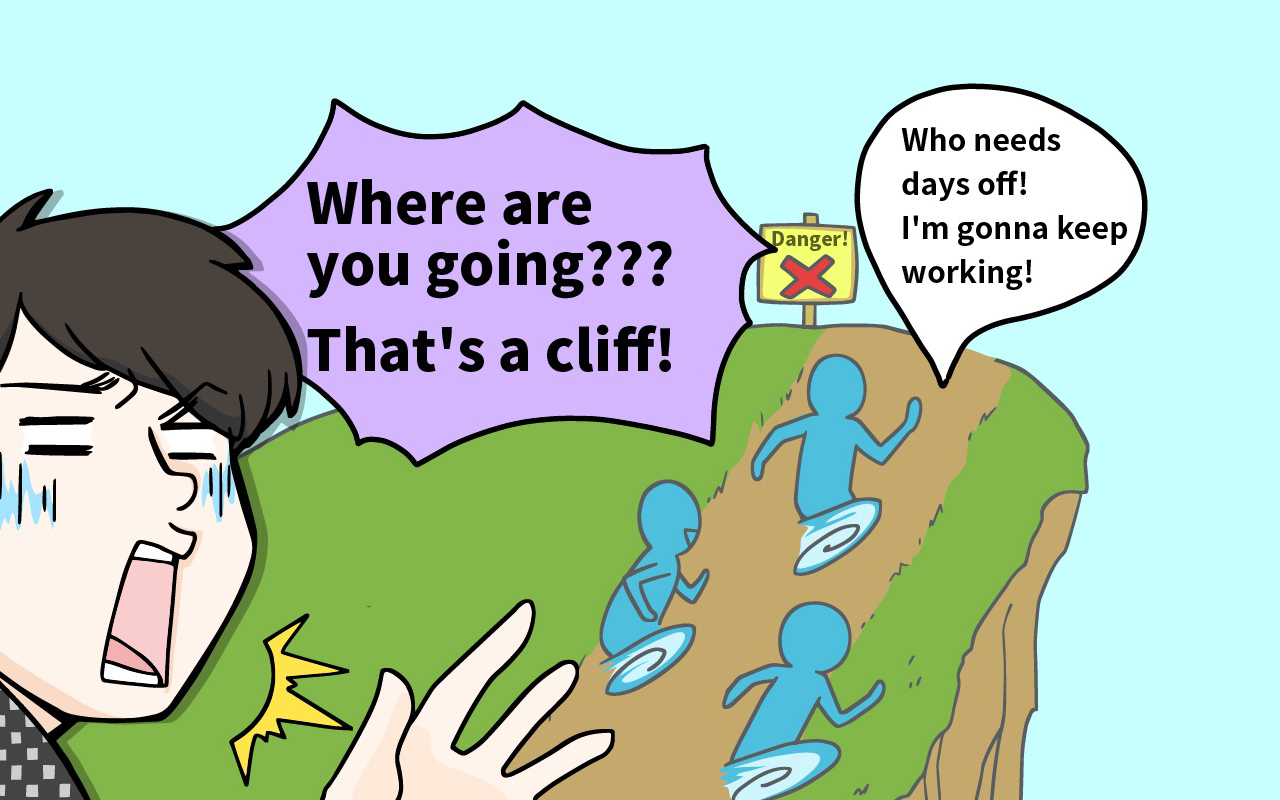 This piece was originally written in April 2018 by Seiichiro Kuchiki for our Japanese twin media website Cybozu-shiki. Check out Seiichiro's blog and Twitter (in Japanese) for more.

I'm terrible at taking time off.

Don't get me wrong, it's not because I actually want to work. Trust me, if I could, I'd just lie in bed reading comics all day. There have been some pretty awesome ones coming out recently.

I guess it's not that I'm terrible at taking time off, but rather that I don't really know how to take time off. Resting isn't my strong point. Mostly because I keep thinking about my work, and in doing so I can't seem to ever really get away from it, even on my precious Saturdays.

One thing I noticed was that putting income above everything else isn't good for my mental state. Even when I thought I should be leaving the office, I found myself painfully aware that around me a lot of other people were still hard at work, leaving me with a crippling sense of anxiety.

As a result, fatigue settled in. Even on days when I was supposed to be resting, I ended up feeling like I was always at work. My productivity dropped, which defeats the purpose of resting in the first place.

Something had to change. Using trial and error, I decided I was going to become better at disconnecting from my work.

I've always been jealous of people who can say without a second thought, "I'm going to take a week of paid holiday and fly down to Bali." But I've decided I can't stay jealous forever. Even though I'm not quite at that level yet, recently I've slowly been getting better at not working. That's what I want to share with you. Hopefully this piece will help some of those who, like me, are not good at taking time off.

Stop making work harder for yourself

What does being bad at taking time off really mean?

Let's start by addressing this issue. I believe there are two main reasons people don't rest. The first is a positive one, the feeling of "I want to get things done now so that I can enjoy myself later." The second is a negative one, "I'm afraid that if I take time off, I'll fall behind."

If we put these together, it's easy to see that they're two sides of the same coin. In the end, either can be fueling that familiar sense of anxiety that causes you to switch on your work laptop on what was supposed to be your day off.

It gets even worse when we start using arbitrary milestones to appraise our work, with thoughts like "I should relax next week instead, when I'll have fewer things to do," or "I have to keep up with all of the amazing people around me."

I began to feel like anxiety at work was not something I could fully control; like there was no simple strategy to solve my problem. I found myself caught in the belief that I constantly had to be giving my work everything I had, until I had nothing left.

We can't all be Elon Musk

So what should you keep in mind if you're like me and can't relax because you're too busy cowering before the tyranny of arbitrary expectations?

Well first, simply the fact that our bodies can't handle it. When I was in my 20s, I was able to pull all-nighters day after day and feel relatively fine. Recently however, if I don't rest properly my performance will deteriorate. All-nighters now take a heavy toll, so I stopped. Taking time off is a necessary component of quality work. This is something I had been told many times before, but never really understood until now.

An unfortunate truth is that there will always be some work you could be doing. Tasks will pile up for as long as you live. Which would be fine if life were a sprint, but if we let that way of thinking take hold, we quickly realize as soon as we're done with our sprint, the next one has already started. In the long run, we just can't keep up. On the other hand, if we start treating our working lives more like a marathon, in the long run we should be able to cover more distance.

Let's push this logic a bit further. Many of us think "If I keep working, even on my days off, I'll become one of those people who excel at their jobs." Instead, we should learn to recognize that it's more likely that an overactive workstyle will drive us away from excellence. Top athletes know better than anyone that rest is an integral part of work, and that pushing ourselves beyond our actual limits is not sustainable. That's why, at least for me, working on my days off is counterproductive.

In my opinion, people who rest properly and gradually improve their performance end up being the ones who truly excel at their work. Of course, there will always be exceptions. Let's just say that my advice is targeted to the people who aren't Elon Musk.

With all that in mind, what is my advice for the people who have never gotten used to taking time off?

One hint would be to think more like the aforementioned top athletes.

If you can't enjoy your time off because you're worried about work, you might as well start thinking of time off as its own work task. In doing so, you should be able to get rid of at least some of the anxiety that comes from comparing yourself to the people around you.

I found hidden benefits to this way of thinking when I started to input blocks of time off in my Google calendar, the same way as for regular work tasks. For instance, I would make an appointment to mark the time I wanted to stop working, which made any overtime feel more like I was running late for my time off. The strange thing is, as soon as I started to consider time off as a kind of appointment, whenever I procrastinated on taking a break, it began to feel more like I was breaking a promise.

Of course, I would do the same with days off, also saved into my calendar as a kind of planned relaxation. Occasionally I would still find myself doing activities related to my work, like going to bookstores or attending events, but I would always do so with the mindset that I was actually resting.

In the end, it's all a matter of prioritization. Worrying about work means work takes precedence over other activities, which inadvertently leads to doing more work. But by deciding that rest was an integral part of my work, I was able to raise the level of priority of taking time off to the point where it felt like a promise, and I started resting more.

Some people may think that this approach is going a little overboard, and they can manage without it. However, I really would recommend for those who aren't good at taking time off to give it a try. In this day and age, it has become harder than ever to disconnect from work. Even on days off, services like Gmail and Slack don't stop running, and urgent tasks could potentially come at any moment.

Some people may be tainted by this unhealthy work ethic to the point that if you let your guard down even a little, you'll find yourself doing some sort of work. To those people, I'd recommend asking yourselves, "Can I really keep doing this and still be OK in the long run?" If you truly believe the answer is yes, then by all means keep on running at your current speed. But if your answer is that it may get tough, you should take another look at your true objectives. Maybe slow down and rethink the way you've been going about taking time off.

As for me, this year I'll be enjoying a full week of summer vacation down in sunny Bali.

Illustration by Eiko Matsunaga. Translated from Japanese by Alex Steullet. The original Japanese article is available at the link below.

Working at a Japanese Sento: Work in Progress Japan #2, Honami Enya at Kosugiyu

Succeeding in Life Starts With Rethinking How We Work

When My Child Got Sick, My Team Stepped In