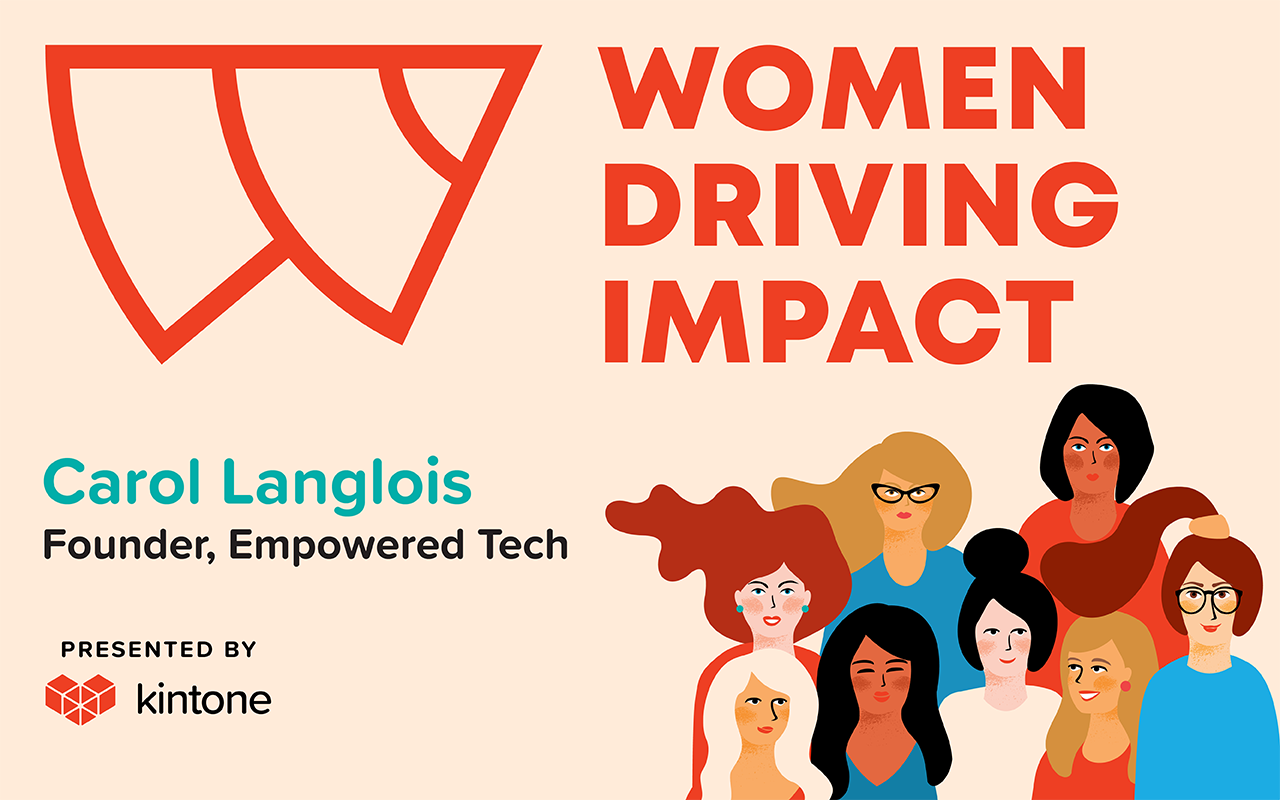 Creating an inclusive workplace based on respect, belonging and empowerment may not be of much concern for many organizations, but the research and business benefits present compelling reasons for making it a priority.

Diversity has been linked to more creativity and innovation in the workplace, and it's no surprise why. When people with different skill sets, backgrounds and experiences are brought together in one workspace, it leads to more effective problem-solving.

Dr. Carol Langlois, a lifelong educator who ran the MBA programs at the University of San Francisco, spoke to Kintone's former marketing director Nicole Jones about women's leadership and how to create inclusive organizations that value diverse backgrounds, cultures and workstyles.

Dr. Langlois's educational résumé is a bright one. In addition to her work at the University of San Francisco, she served as the dean and associate provost at Mills College, as well as vice president of the Hackbright Academy, the first all-female coding school in San Francisco that welcomes and trains women in software engineering. She's also the author of the book Girl Talk: Boys, Bullies and Body Image, a compilation of interviews with teen girls on the topic of self-esteem, and is the founder of Empowered Tech, a community space for women in tech to come together to share tips, tools and resources with one another.

Here is an extract of some of the key takeaways from this episode:

Nicole Jones: How did your background in academia and female empowerment help redefine Hackbright's admissions process?

Dr. Carol Langlois: Previously, I ran MBA full-time, part time, and exec programs, so I've read thousands upon thousands of MBA applications, as you can imagine. You can tell pretty quickly who's going to be a good fit for a program, both academically and culturally.

When I went to Hackbright, I wanted to learn how I could encourage more women to be a part of the program. I started by looking at some of the really successful women who graduated from the program. I wanted to know everything that I could get my hands on about them. I then used patterns from their data to identify specific skill sets, and so on.

As a base, if someone had a background in STEM, they probably had a higher propensity towards coding programs. But then we identified other things that were just as important. It came down to the non-tangibles, such as emotional intelligence, resiliency and flexibility.

As a result of this finding, we started tweaking interview questions to focus more on non-technical skills. How an applicant handles challenges is more telling than their ability to code, especially when it comes to whether or not they are going to be successful in the program, and if they will be placed at a company afterward. 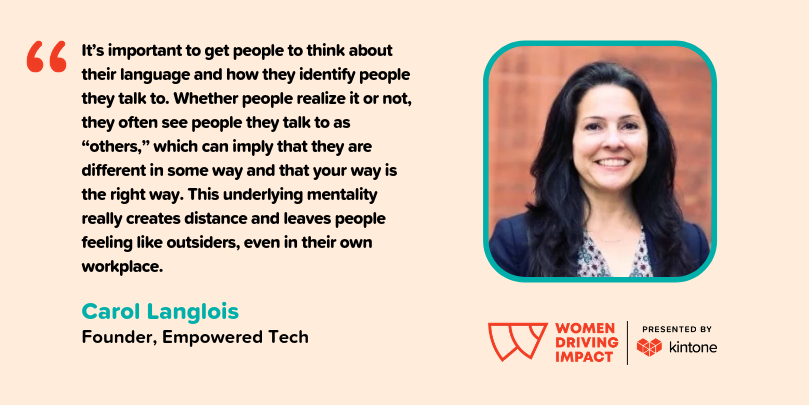 Nicole: What lead to the creation of Empowered Tech?

Carol: When I left Hackbright I decided to build Empowered Tech. I wanted it to be a community space where women could come in and get feedback and support for their questions. Questions such as "Has anyone else experienced this at work?" or "Hey, this is going on with my manager. Have any of you had this experience?" or "I'm on an all male team," which comes up a lot. Do you know how wonderful it is for a female software engineer to walk into a room and find seven other women and they all say, "I'm the only woman on my team"? They're instant family. It really helps give these women a sense of community away from work.

I started Empowered Tech when I left Hackbright last September. We started with 12 women and now we're at almost 780 women. It's been so exciting to grow.

Nicole: I know you bring in some really great speakers across different companies and different fields on a variety of topics. Does impostor syndrome come up for women working in tech and the digital organizations? If so, how do you recommend we tackle impostor syndrome and support women's leadership?

Carol: It's a very important topic and it's one that I've actually written on and studied. I've done therapy with women who have had issues with impostor syndrome, which is this belief that everyone else in the room knows so much more than you, and you really don't know why you're there or how you got there.

Today, I hear women at Empowered Tech say they go to these interviews or they go to these events and they just don't feel like they're welcome in the room. Well, that's not just coming out of nowhere. But let's add a second layer to it. Let's add in race and let's think about that: Women of color trying to enter, or entering areas that have not been welcoming to them. They are feeling this impostor syndrome in a way that is magnified.

A lot of this feeling is driven by companies. If companies produced cultures that felt more welcoming, less threatening, less bro-culture, then these women would come in with less of these feelings.

Nicole: So what can companies do to create environments that are more welcoming to a diverse group of employees, particularly women reaching for leadership roles?

Carol: I just went to the Tech Inclusion Conference, and there were so many great speakers from a variety of backgrounds: a mom re-entering the workplace, a male with a physical handicap, someone who identifies not as male or female. One of the things that they all brought up was this fact that the culture they face has the right to ask them questions such as "Oh, what happened to you?" or "Oh, why do you feel that way?" Those who are part of the dominant culture tend to think "If I don't feel that way, why would someone else?"

It's important to get people to think about their language and how they think about the people they talk to. When you're talking to other people, whether you realize it or not, if you're identifying them as "other," you are saying that they are different in some way and that your way is the right way. 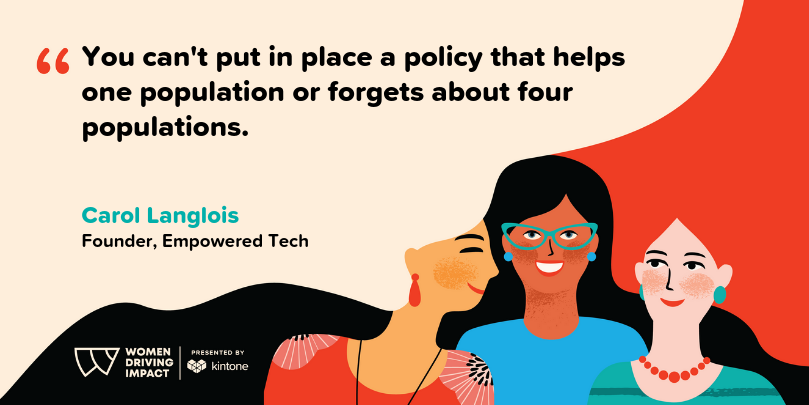 I think there has to be more training in companies around cultural sensitivity.

One of the things I thought looked really promising is that we have so many more women in executive leadership roles that can think about what other women need or want in a work culture, whether it's needing to work from home, caring for children or looking after an elderly parent&#8212a lot of that primary caretaking ends up becoming the responsibility of women. So how can companies adjust to work with that?

Nicole: Thank you so much for your time!

Learn more about Dr. Carol Langlois and Empowered Tech, a free community space for women with monthly workshops and panel events. Dr. Langlois also recently started Career Club, a workshop held over six weeks, once a week for just a few hours. Career Club seeks to help people figure out the next steps in their career, whether that involves breaking into tech or trying to move into their next tech job. It's a one-stop-shop for all your career needs, whether it's your résumé, three-minute elevator pitch, negotiating skills, networking skills, or general understanding of tech companies.

This piece was originally written in January 2019 by Nicole Jones for the Kintone blog. Check out the original article here.
Edited for Kintopia by Alex Steullet and Richard Ho.

A former Kintonian, Nicole currently serves as the Director of Communications and Community Engagement at the nonprofit social enterprise TechSoup.

Richard is a former brand communication intern at the corporate branding department at Cybozu. He is currently pursuing an economics degree at UC Berkeley as a rising junior, and plans to return to Japan to study abroad his senior year. Richard is a Chinese American born and raised in California.

Is Japan open enough? Japanese CEO asks foreign workers about the best and worst of working in Japan