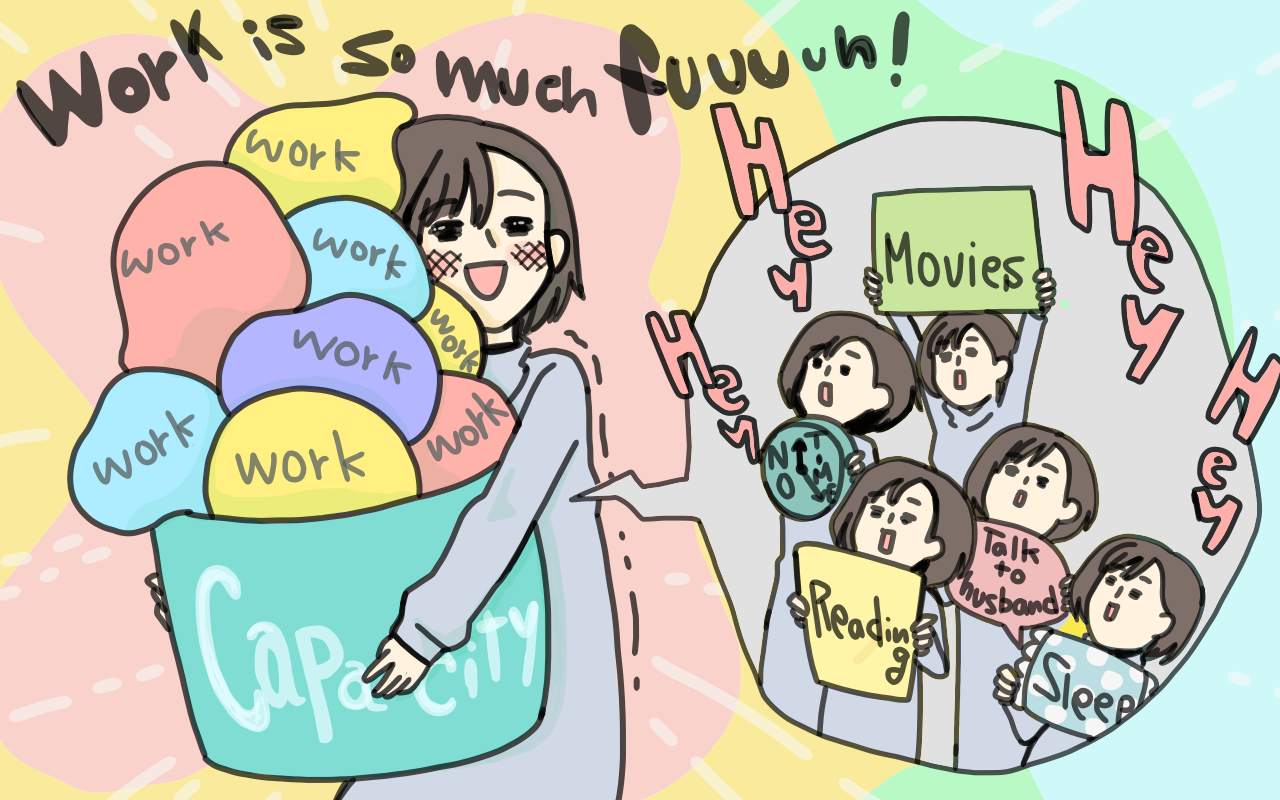 Earlier this year, I woke up one morning and all of a sudden found myself completely unable to go to work. Even though in my mind I knew that it was time to get going, the tears wouldn't stop streaming down my face, and my legs wouldn't start moving. I knew that I had to go to work—I had an important interview that day. But no matter what I told my mind and body, neither seemed to listen. Over and over again, I tried to move but couldn't.

After a while, I gave up. I got in touch with my team, told them about my situation, and starting that day, I took a week off. I couldn't understand—I loved my work! Why were these things happening to me? I was shaken to my core.

Over the following days, while I was looking back I realized that one major reason for what happened had been the freelance work that I had started a year earlier. Dedicating all of my energy to both my main job and that side job was too much; I had gone beyond my limits.

Today, I want to write about what I learned from this experience, and share my thinking about how to approach having work on the side.

When I started, it was so much fun!

I work as a regular full-time employee five days a week at Cybozu, a major Japanese I.T. company. My job is to create content that promotes my company's values. Specifically, I'm in charge of running Cybozu's online media website CybozuShiki, as well as supervising the publication of our CFO's upcoming book, to be published later this year.

About a year ago, as I was busy doing my regular editorial tasks, I was approached by someone outside the company asking me if I wanted to work with them. In other words, I was offered a side job. I accepted, and started to work as a freelance writer and editor.

In the beginning, I was over the moon! I had been wanting to do editorial work on prose since I had been a university student. Whether at my main job, my side job, or in my free time, I was always either writing or editing something. Honestly, I was having so much fun.

I didn't feel like I could refuse any work

When I first started doing freelance work, the workload was pretty limited. Balance between my main job and my side job was good, I was making new relationships, broadening my network—it was a great time.

However, after a while, word about me doing freelance got out, and the amount of requests I was getting for my side job began to increase. Interviews with people I had admired since I was in university, the opportunity to write a column on a topic I was passionate about, editing a book, speaking at an event, the list goes on.

The work was amazing; I felt invigorated, enthusiastically taking on more and more tasks. I thought to myself, "If I let this pass, the opportunity will never come again." Because of this fear and uncertainty, refusal didn't feel like an option. I was driven by sheer will, thinking "I'm still young, so even if I'm overdoing it a bit I'll be fine." Gradually, my workload grew and grew.

For each freelance task, I had to live up to expectations. At the same time, I couldn't slack on my main job. When I started my side job, I decided that I wouldn't slip under any circumstances, so I instead began trimming away at my personal time. I was reducing the amount of time I spent on my private life, hobbies, and sleep.

Around the ten-month mark, I was doing upwards of 80 hours of freelance work a month. I had no time to do the things I loved, like reading or watching movies. Four to five hours of sleep had become the norm. Even when I would be travelling, I always had some deadline coming up, so I would go without a single day's rest for months on end.

On top of all that, I had moved far out into the countryside. My commute had become a three-hour round trip. For someone who doesn't have that much stamina to begin with, who enjoys a leisurely lifestyle, this way of life was causing a daily build-up of stress.

And then came the burnout.

Having no free time made me feel trapped

Not going to work gave me some long-awaited free time, which I used to reflect upon what had happened that past year. How did things get so bad? What changes did I need to make to my life so that it wouldn't happen again?

I realized that the most painful thing for me had been the absence of time. Even at the best of times, there would always be a deadline for a writing or editing project lurking around the corner. The lack of spare time made me feel trapped in body and mind.

It became clear that if I took half-measures or set some vague limits—like scheduling my work in ways that would leave me some extra time, or try to make sure that I didn't take on more freelance tasks than I could handle—I would still end up with too much on my plate. I knew that my personality made it hard for me to say no, so I had to put in place strict and enforceable countermeasures.

From there, I came up with a plan. I needed to figure out how to bridge the gap between my harsh reality and the ideal use of my time.

The gap between real and ideal

An important way of thinking at Cybozu is that all problems are the manifestation of a gap between our current reality and what we ideally desire. It's a way of thinking that I love, so I applied it to my problem. My problem was that I had no time, which left me feeling drained. I reflected upon what my "real" and "ideal" use of time were, took notes about how I was spending my time, and came up with a time schedule that wouldn't leave me feeling drained.

This illustration sums up my reality, my ideal, and what the issue was. My ideal was to have enough time to maintain a healthy mind and body. My reality was that I had no time, and my mind and body were exhausted. The issue was that I was spending too much time on my side job and my commute.

This way of looking at the issue made the solution seem clear.

My situation was that because of my commute and side job, time was being taken away from the things that are important to me, namely reading and sleep.The first thing I did was talk to my boss and increase the amount of remote work I was doing, in order to reduce the burden brought by my commute. Up until then I had gone to the office almost every day, but from then on I had two set days where I would work from home.

Setting this hard limit of ten hours had a tremendous effect. It set a standard for the amount of work I could take on, putting me in a situation in which I had to say "I'm sorry, but I have to refuse" to any work that would make me exceed that limit.

Freelance work should build you up, not break you down

The freelance work I had taken on as a way to enrich my life had instead turned into a source of anxiety and exhaustion. It was a sad situation in which my priorities had been flipped on their head.

In order for that not to happen again, I realized that the most important thing is to always have my ideal use of time in mind. That way, I am reminded that it is okay to give up projects sometimes, if that's what it takes to regain control over my life.

Thanks to my new rules, I now have more time to spend reading and watching movies, more time to talk to my husband, more time to think, and more time to breathe between tasks, meaning that I also feel less stress while working. This new way of life has had broad benefits, not just for myself, but also for those around me.

If you manage to strike the right balance, doing freelance work can be an amazing way to enrich your life. It can bring you a sense of belonging outside of work, help hone your skills, and lead you toward self-actualization. However, take one step in the wrong direction and you will find that it can be a source of overwhelming exhaustion.

Without ever forgetting about my experience, I will continue to look for the balance that works best for me. I will keep on doing freelance work, but only in the way I love.

Written in Japanese by Yuka Akashi and edited by Yoshimitsu Fujimura. Translated into English and edited by Alex Steullet and Richard Ho. Illustrations by Eiko Matsunaga. Original article available at the link below.

Yuka directs content creation and does editing for Kintopia’s Japanese twin website CybozuShiki. In January 2018, she began a side job working as a freelance writer and editor. Starting in 2019, she has also been editing books for Cybozu.

Succeeding in Life Starts With Rethinking How We Work

When My Child Got Sick, My Team Stepped In