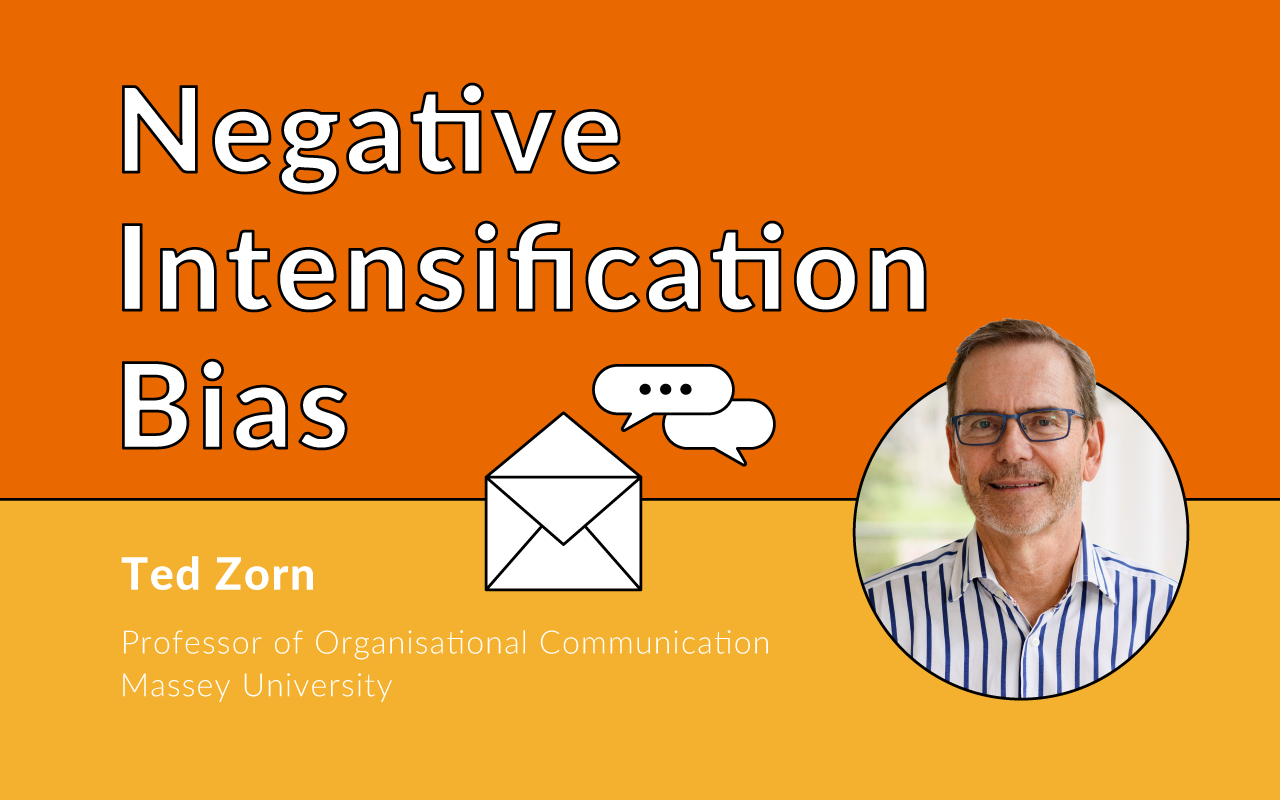 A major consequence of the massive global shift toward remote work is that we have entered an era of things left unsaid. The means of communication we relied on to build workplace connections have dissipated, leaving us with poor alternatives.

In-person informal conversations now have to be scheduled on video conferencing software, which many find mentally draining. To avoid exhaustion, we turn more than ever to purely text-based communication: email, instant message, chat room, message board, and so on.

Unfortunately, of all the imperfect forms of communication, text is perhaps the most flawed. Many of us have experienced feeling attacked, neglected, or ignored in messages that our peers thought were harmless.

This phenomenon of reading negativity into a message without any, or amplifying the negativity of benign criticism, is known as negative intensification bias. To better understand what it is and how to counteract it, we spoke with Prof. Ted Zorn, Professor of Organisational Communication at Massey University. He explained the human psychology behind negative intensification bias, as well as what we can do to have healthier, more positive text-based interactions.

Humans are hard-wired for negativity

Alex: Over the course of the pandemic, a lot of us have noticed that there's a lot more room for misunderstandings in text communication. Why is that?

Ted: Communication is an imperfect process which always involves ambiguity and interpretation. We're constantly filling in gaps in our exchange. There are several reasons this happens more in work-related text communication.

First, there are power dynamics involved. The way you interpret my answers to your questions in this interview is going to be very different from how you would interpret what your boss says during a job evaluation. In a workplace setting we are constantly asking ourselves questions based on broader context like, "What does this person think of me?" and "What are their intentions?"

The second thing is that text communication lacks a lot of the features of face-to-face communication. When speaking to someone we get immediate feedback based on their body language, facial cues, tone of voice, and so on. If I answer your question and you look at me quizzically, I know I need to provide additional information. That doesn't happen in text communication.

Finally, there is something called social presence. When I see you, whether in person or over video chat, I see a human face. I feel more connected to you. Over text that social presence is gone, which is why people are more prone to writing inflammatory messages on chats and emails, compared to when speaking face to face.

Alex: Does that mean text communication is somehow dehumanizing?

Ted: Potentially, yes. We see it all the time—people who make horrible remarks online will become much nicer face to face. Social presence encourages us to adapt. Then when we see the other person actually acting friendly, we're more likely to act friendly ourselves.

Alex: When you say that all communication has ambiguity, we could imagine it going both ways. Yet we are much more prone to overly negative interpretations than overly positive ones. Why is that?

Ted: Studies show that in general, humans have a negativity bias. The process of evolution has made us more attuned to the negative than the positive. Think about it evolutionarily: You're out in a beautiful meadow on a sunny day when you hear a rustling noise. It's likely to just be the wind, but it could also be a saber-toothed tiger. The humans who interpreted the rustling as a saber-toothed tiger and ran away became more likely to survive and pass on their genes. Evolutionarily, being attuned to negative information saves lives.

What we see in the modern world is that if your boss tells you 10 things they liked about this year's performance and one thing they didn't, it's the latter that we tend to focus on. That's negativity bias. 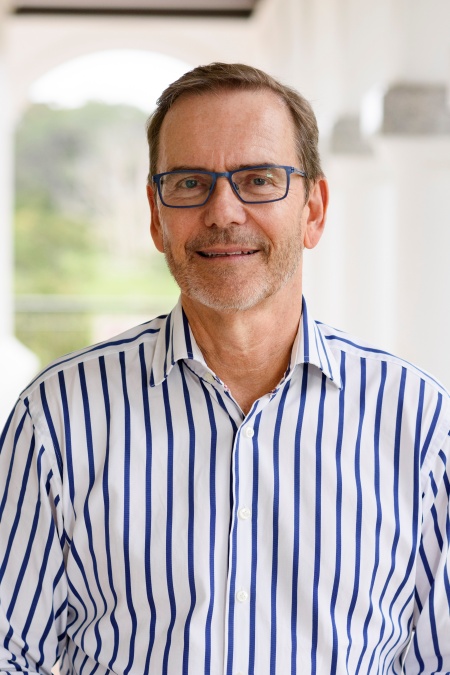 Ted Zorn is Professor of Organisational Communication at Massey University in New Zealand. He is former Dean of Massey Business School and former Deputy Vice-Chancellor at Massey University and has held various leadership roles at other universities. His teaching and research specialty is organizational communication, organizational change processes, and enhancing workplace well-being. He has published widely in communication and management journals and has consulted with a wide range of companies, government organisations and not-for-profit organisations. He is past editor of the academic journal Management Communication Quarterly. The research on which this interview is based may be found here.

Alex: How were you able to measure negative intensification bias?

Ted: We had people give us actual emails that sparked a negative emotion and asked them to rate that email on various scales. Then, we have neutral observers rate the same emails.

What we found is that people often read in negativity when none would be obvious to an outside observer. However, context is also important. When we communicate, we are not just exchanging words in the present. There is a history of conversations we previously had, and if you mistreated me in the past, I'm going to have that in mind when reading your messages. Every message is interpreted in the context of a relationship and a workplace culture.

Alex: I'd like to go through the different roles involved in text communication and ask what we can do to avoid or minimize negative intensification bias. Let's start with the person writing the message. If I really want to avoid negative interpretation, my instinct would be to go entirely the opposite direction and write an overly positive, flowery message. Is that the way to go?

Ted: No. If you overdo it, people will feel like you're trying too hard. Then, they'll start questioning why you feel the need to try so hard in the first place. It's not enough to be careful or positive in your writing.

That doesn't mean you should throw out writing etiquette altogether. There are important things to keep in mind. For example, avoid sarcasm and humor when discussing sensitive topics. Send messages only to the people who need to see them, rather than CCing everyone who might possibly be interested. Be careful not to embarrass people in front of others. Those are just good manners.

Another thing to keep in mind is that we see a lot of the bias coming from impersonal, often short messages from people higher up in the organization. Messages like, "I need this by tomorrow." There's nothing objectively negative with this message, but in text communication, it can feel dehumanizing.

Instead of short impersonal messages, one thing you can do is incorporate phrases acknowledging that you're writing to another human being. "I'm sorry to impose on you, I know you're very busy with project X, but..." These kinds of comments show that you respect the other person's time, which can help a lot with reducing negative bias.

Alex: Don't those kinds of comments become generic though? Like when every email starts with "I hope this email finds you well."

Ted: Yes. It's important to go beyond social niceties and treat the recipient of your message like an individual. If you're worried that even then your message may be misinterpreted, it might be better to schedule a phone or video call.

More important however is to build a positive relationship in the first place. Have social time on a regular basis with the people to whom you write a lot. Build up social credit, so that when there is ambiguity in your communication, they are more likely to give you the benefit of the doubt.

Don't rely on your ability to read others

Alex: Next, I'd like to discuss the other side of the equation. What can be done as the recipient of a message to not fall victim to negative intensification bias?

Ted: First, we need to understand that this is a real problem that can affect everyone. Research has shown consistently that human beings overestimate their ability to correctly interpret other people's emotions. We think we're really good at reading other people, but we're not. Awareness of this fundamental aspect of human psychology should be our starting point.

Then, once again, it's important to build positive relationships. If you know someone on a personal level, you are less likely to interpret their messages as hostile.

Alex: When you say that we are bad at interpreting emotions, is that just in text communication, or across the board?

Ted: It happens in all forms of communication, but especially over text. There's a theory known as media richness theory, where forms of communication are placed on a spectrum from "rich" to "lean." The richest medium of communication is face to face, where people exchange not just physical and vocal cues, but also things like touch and smell. All of these senses activated in unison are what creates a personal connection, giving us more clues to interpret the other person's emotions.

Writing and typing a message are among the leanest media. We have very few means available to convey emotion. We don't get immediate feedback. It's very impersonal, and we have very few clues about the other person's emotions.

As a general rule, at the earliest sign of conflict, it's best to move the interaction onto a richer medium of communication. 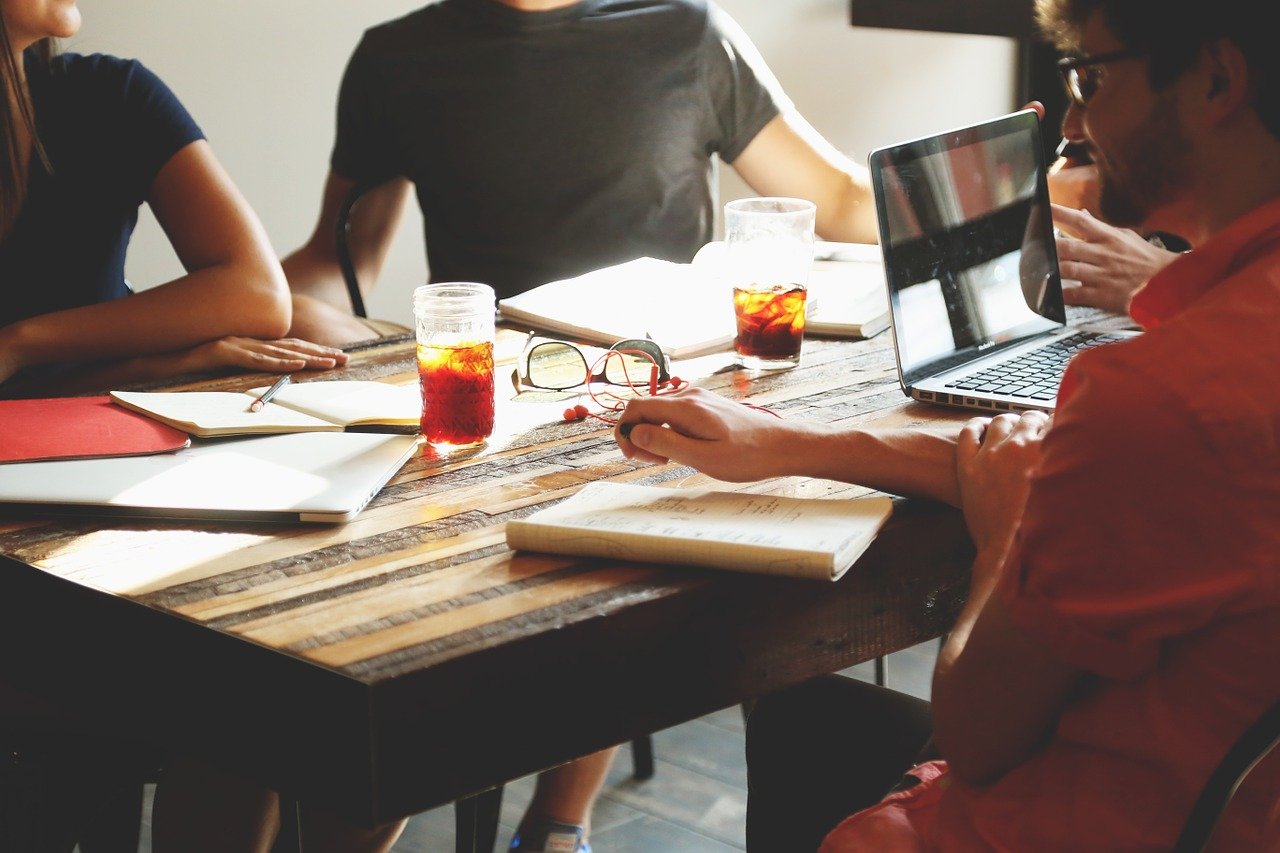 Face to face is the richest medium of communication, which makes it the best for conflict resolution.

Alex: There are times, even in a richer medium of communication, where there is disagreement over whether the sender was too offensive, or the receiver was too easily offended. How would you recommend navigating these types of conflict? Is there such a thing as being overly sensitive?